An Epic week part 4 The finale The Chillis

The last instalment of the epic week saw us head back to the stadium of light in Sunderland to see the Red Hot Chilli Peppers.

The day started pretty wet, it had been raining, a lot. For the gig on Thursday we had bought some 97p ponchos at Asda, a great purchase but hadn't used them as the weather had held out, but unfortunately it looked like we would need to use them today. My friend Boozy picked us up and we headed through. As soon as we got out the car, we had been walking for 1 minute and the heavens opened and it absolutley lashed it down with rain, to say we got soaked was an understatement. We found shelter under a tree, yet that still didn't fully protect us, we headed for a nearby pub, and typical with rain as soon as we found this refuge it stopped.

We had a few drinks and a catch up amongst friends before deciding it was time to head towards the stadium. As we were 2 minutes away from the stadium, yep you guessed it the rain desended on us again, we found shelter from the worst of it by the side of a building, before running to the stadium and once again as soon as we were inside it had stopped. 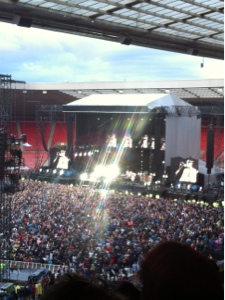 Many people were in the same predicament and many drying themselves under the hand dryers in the toilets. Once inside we had to find our seats, little did we know that running in from the rain had took us to the wrong area of the stadium, we had to be guided through the corporate boxes by a very helpful steward, it was a little tempting to burst into one of the boxes and shout sorry were late, but somehow I don't think this would have been recieved well.

The gig itself seemed like a mini festival, there were 3 support acts, reverand and the makers, the local band the futureheads and the wombats before the Red hot chilli peppers. All were good and well recieved by the crowd. As I had predicted to my OH the futureheads would play hounds of love and divide the crowd to sing the chorus as they always do. The wombats were very lively and in all honesty looked like they could be a main stage headline act in their own right. 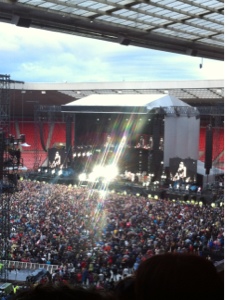 The Chillis came on in their usual high tempo energy. The band did a lot of old songs mixed with the new and the set felt very well balanced enough for the crowd to appreciate and please all types of fans. There was also a lot of their famous jams inbetween songs, this not something I was too aware of not being a huge fan, I enjoy their singles but can't confess to knowing many album tracks, but nevertheless I was able to enjoy the show. OH had us dancing, she had me stood up grabbing hold of me to ensure if she tumbled I'd be taken down with her.

So that was our epic week of gigs, it was great and gave me appetite to continue my love affair with live music, next up Leeds Festival...
Posted by Dales84 at 13:34