An Epic Week Part 3 The Boss

Thursday nite saw us go to Sunderland to go see Bruce Springsteen and the E Street Band live. To say that in the past 7 months I've been looking forward to this is an understatement. As many of you know The Boss is and always will be one of my favourite artists, I don't recall any of his songs it albums that I have outright disliked .
For this gig I had not only had the day or the next day off but the whole week. This was the jewel in the crown of my week, the day I was looking forward to the most. We had got to Sunderland for around 2pm, a full 5 hours before the show to have some drinks and some food. It was quite clear from walking round town that their was an air of excitement hanging around, many people walking with either flags of the USA or walking around with Bruce Springsteen t-shirts. There was even some people dressed as cowboys and plenty of denim for all to see. As we walked the streets many bars could be heard playing an array of The Bosses hits, plenty of them to choose from.

In recent years Sunderland had started hosting gigs in the summer, with bands such as Coldplay, Oasis, take that, kings if Leon all playing, but this gig, this act is on a whole different level to them. Yes they are all bug name bands, there's no doubting and denying that, all those gigs were spectacular shows I've no doubt, but Bruce and the E Street are in their own category of super stardom, far higher and mighty than shy who had played Sunderland before and it's because of this that you could sense the excitement. 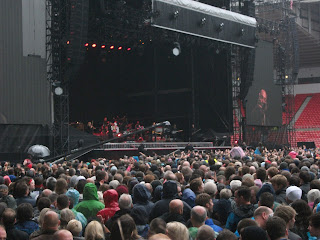 Once the show had started we were already well oiled from the drink. We initially started quite close to the front enjoying the first few tracks, but had got separated from our group of friends. Usually at gigs I'm more far to just bopping around, listening to the music and moshing a little if need be, yet at Bruce I prefer a. It more space to dance (although I'm not a very good one, the fact I had a fair few beers probably helped aid this desire) with this in mind we soon went further back in the crowd. We had found our friends and enjoying the music.

The boss played a lot from his new album wrecking ball and then an encore if hits. His whole show lasting between 3 and a half and 4 hours. The weather may have not been the best, but it could have been a lot worse, it being overcast and for only 5 minutes actually raining. It didn't dampen any ones spirits as The band started belting out hits such as Born to Run, Dancing in the Dark and Glory days many people were singing and dancing, often with perfect strangers, but this doesn't matter as their is a certain cameradere present when seeing an act of this magnitude. Couple this with people hearing the Boss sing new songs live for us for the first time such as waitin' on a sunny day and Jack of all trades, the crowd took really well eager to hear each song thrown our way. 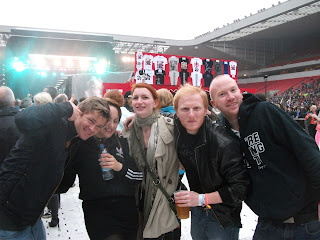 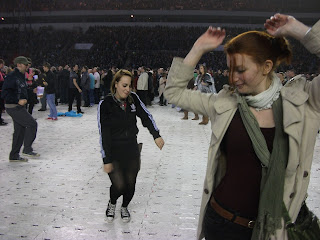