The last couple if days have been taken up by a spinathon by charity. Never heard if a spinathon? Basically it entails spin bikes and keeping them spinning for a period of time. This one was a 12 hour spinathon so that meant from 7am in the morning at least one of the spin bikes had to keep spinning at all times until 7pm in the evening. All this in the name if children in need. 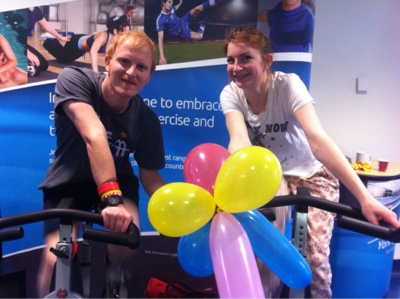 We decided we'd do this at work last week and so I then decided it on myself to do the whole thing, yes the whole 12 hours! After I decided this, Gertie (my OH) also decided that she wanted to do this. To help us other members of staff and members at our gym helped keep us motivated by signing up for guest slots.

The day started well and full if energy, also started with a macdonalds breakfast to help keep us spurred on, this was tactic borrowed from our great north run earlier in the year. All 5 bikes were full a spinning and people full of optimism in the task ahead. The wheels kept turning and members start kindly donating which was the main thing as the sun rose over the building. 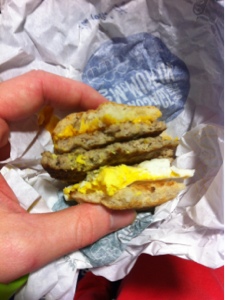 The first 3 hours went by quite quickly as a quarter of our deficit passed, the buckets were getting regular do stop s and the next 9 hours if the last 3 were to judge wouldn't be an issue. Slowly the first people who signed up to help motivate left one by one and we were joined by new people who replaced them each adding their fresh enthusiasm for the hours ahead.

Before we knew it we were over halfway there. More money had been donated staff had gathered around to watch and encourage and many more people had helped with guest slots some taking it serious and some there to provide laughs but the main thing I can remember is that between the 3 and 6 hour point my bum started hurting real bad, being sat in what can be kindly described as an uncomfortable saddle for this time wasn't good. 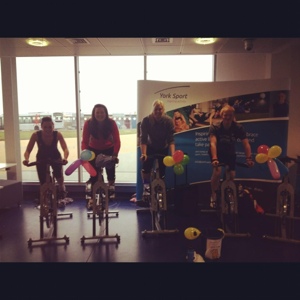 After the 6 hour mark just before the 9 hour mark cramp started in my left knewe, this now meant the transition from being seated for 5-10minutes to being standing for 5-10minutes to relieve the pain being sat was know being joined by pain being stood. Nevertheless after occasional stopping of the left leg (while the right leg kept spinning) and stretching on the bike it helped make it a little bearable, albeit through gritted teeth.

Oranges were given to keep the spirits up and proved a welcome help. More friends and members came on to help, while members kept donating. Gertie was doing great and at many times seemed like she was dealing with it a lot better than me. She didn't seem to feel and pain in her knees just in her bum being sat in the saddle. She seemed to be able to keep going and going just on the few cups of tea and bottle if Ribena she'd had during the event. 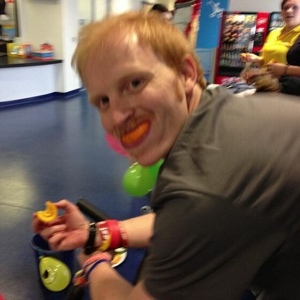 All the seconds,minutes and hours crept down to finally we were in the last half hour, the Ricky soundtrack was on the music system to spur us through, you couldn't help but look at the clock wishing each luck had miraculously ticked down to the last minute, then it came 7pm it was over, done, finito, 12 hours non stop cycling was done. After a stretch off it was home to shower and bed a hope we weren't too sore the next day. 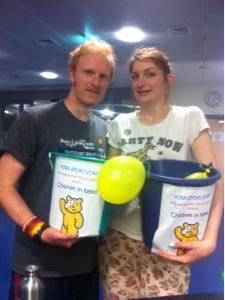