Today marks the 50th anniversary of James Bond on the silver screen. Now I'm a massive Bond fan and can't wait to see the new film at the end of the month. The Bond franchise us something us Brits can be truly proud of and is something that can, at the best of times as Roger Moore once said, "Keep the British end up".

Of the 22 (soon 23) films there have been many great scenes and actors/actresses to pick out just one to be you favourite as a fan would be nigh on impossible. To pick a favourite film again would be, but the 3 that come closest to winning that accolade to me are, Casino Royale, The Living Daylights or Goldfinger.

Again to pick out the best, or my favourite Bond is a tough task, but that award currently lies with Sean Connery for me. He was a great Bond, great action and actor. He had more good movies than any other, but I can easily see Daniel Craig taking over this award the way he is going. Just as I side note I really liked Timothy Dalton as Bond, playing a more darker version just, just like the books were written, if he had more Bond Films he may well have been number 1 for me.

So from me it's Happy Birthday Commander Bond, here's to 50 more years.... 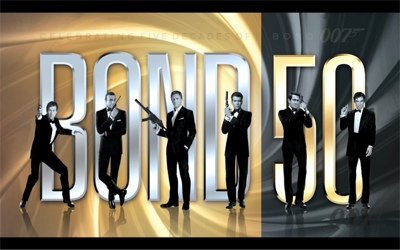