I sit here in my mothers garden, in the nice warm north eastern sun typing. Eldest daughter and my nephew playing freely in the garden and I can hear my mam singing nursery rhymes to youngest daughter. Today is going well at its only 9am!

Yesterday saw a few events take place. So where to start? Well first event of the day was the Olympic flame passed our house. We went to watch it and took the kids, we had a good vantage point and got to see it go right past use, it was good that alot of people also had the same idea and wanted to see, what, I am sure will be the only time I get to see it in my lifetime. We were at a change over point for the flame too, and I felt quite sad for the Guy who had to take on the flame, not because of anything to do with him etc but because he was being mobbed by everyone, getting people circling him until the police asked them to get away as the torch was coming. Ok it's great that he's getting attention and recognition but people were mobbing him just for a photo of him with a stranger, someone he never met and an as of yet unlit torch, no doubt people will be posting the pictures on facebook and fair does to them but surely that's not what the torch run is about is it? the chance for others to have a picture of them next to an unlit torch. 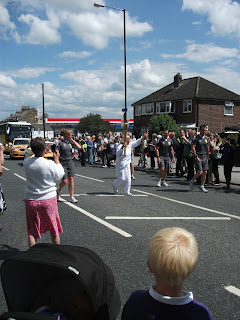 After this me and the daughters headed north to my mams house. We left mummy to have a day of relaxation to herself and have peace and quiet while we descended on Nana for 6 whole days, the girls mam is joining us all on Wednesday so she'll get a whole 24 hours to cherish by herself.

Last night I went to the first of three gigs this week. It was a great gig. Blink 182 were on form and looked to be at their best. I've had the joy of seeing them two times previously, each time better than the last, but last nights show saw the band act more comedic as ever before, they looked like they were enjoying it, and so because of their apparent enjoyment, this fed off onto the crowd, who in turn enjoyed the night. As the band seemed even more enjoying themselves their music playing and singing grew more bold, guitar and drum solos louder and harder than ever before. To say the gig was good is an understatement. 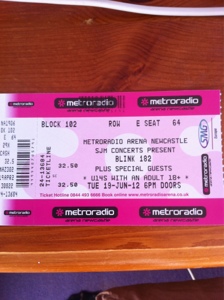 For an encore the band decided that restricting themselves to the main stage wasn't good enough, Mark and Tom (the guitarists) took to a pre arranged centre stage, something that was just bigger than the garden patio I'm currently sat on. The played with their acoustic guitars telling stories of the 2 songs they were about sing about how they were wrote when they were teenagers in California. Of course this probably had happened at all the other shows they've recently played, in fact I know they had as my good friend Disco Dave had been to them and told me about them, but you get a sense that all the comedy moments in the show was pre routine, but it just happens on the spot. 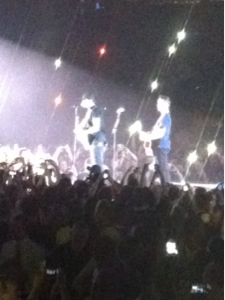 Blink also announced in the evening that England was winning the football, and 5 minutes later announced that England had won to a cheer from the crowd, this would also be something Tom would refer back to to get a cheer if one of his jokes fell flat on it's face, but he does so brilliantly the crowd laugh at him anyway. Theres not many American bands I can think of who would have had the courtesy to do such a thing, but with Blink you sense that these shows meant a lot to them, they meant a lot to the crowd, after all many had probably done as I had and bought the tickets 2 years ago expecting the show last year only to have it rearranged to this year.

I ended the evening waiting for 40 minutes to see the band and the back gates, there was nothing pre arranged it was purely that's where Dave wanted to go, he had managed to go backstage last week in their London shows, so I thought might as well join him, we didn't see anyone and after 40 minutes I decided that I'd had enough of waiting, I'm still waiting to hear if he saw them today, but I wouldn't mind if I missed them, seeing them on top form like I did tonight was enough. They managed to get a healthy mix of old and new songs playing classics like carousel with new songs like after midnight. They also played their comic songs like Blew Job and Country song, much to the crowds delight. 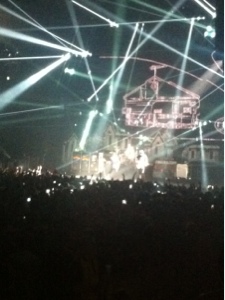